“You can’t teach an old dog new tricks” Says who?

That has got to be one of the most obsolete cliches out there about dogs.

Yes, you can. And you should.


Dogs keep learning as they age. They become wiser. They continue to be interested in new experiences and new opportunities. They are happy to learn new tricks, by the way. They are on their own path of development, their own journey, and shouldn’t been discounted as “done” when they are really getting the hang of this crazy human culture. Just because they don’t need training doesn’t mean they don’t need mental stimulation.

Some older dogs discover new joys in their “dogginess.” They may start exhibiting new behaviors on their own that display their dog culture in ways that they never did when they were young.

Years ago my dog Hesher learned to be “bad” in his old age as he strove to compete for my attention with the young whippersnapper named Vida. He started jumping up for the first time when he was about 14, and the look of pure joy on his face when I allowed it was priceless. He learned new ways of interacting with dogs that brought him more confidence, and even got on the bed sometimes (!). Vida is now 12, and this year has been demonstrating some new behaviors of a different sort.


More and more she enjoys making her own bed. Her bed here in New Hampshire is a large plastic oval bed filled with various bedding items. She LOVES moving the bedding around in that tub. This bed affords her more opportunity to make changes than her more typical bed in California, and she relishes the digging and re-arranging. 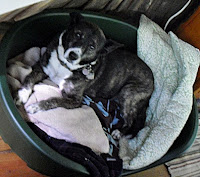 She also has begun ritualizing her meals with covering gestures. She’s only ever truly covered up a raw bone, rolling it up in a towel I’d put down to keep the blood off the floor. This just happened two months ago, much to my surprise, as she’d never hidden or covered anything before. But it clarified the strange gestures she’d been doing in front of her bowl lately. She’d been “acting picky” with her food and I though her chin-tucking gesture had to do with her throat, as she’d always been a bit sensitive to swallowing dry items, or even having pressure from a collar.

Her change in attitude about her meals had started to create a problem between us as I would, on some days, reach the “your dog, just eat the damn food” point. She’d always been a good eater, what was going on? Well certainly our dirty looks back and forth weren’t helping. Interestingly, it had gotten a little better since the bone covering incident, she had stopped dumping mouthfuls of food onto the floor next to her bowl and, though proceeding more slowly than I was used to seeing, was eating her meals.

This new perspective, about Vida rediscovering her ancient culture, if you will, was offered to me by Gina Palmer. It was a much of philosophical perspective than I’d expected from a communication with my dog about “food problems” as I termed it, but it opened up a whole new way of viewing it for me that took away the animosity and tension.

The very first meal after our talk with Gina I was clear that I was going to maintain a positive attitude, no matter what. Well Vida seemed to want to test that out. She went to the bowl, stepped back, and gestured. She walked up to the bowl and sniffed the food again, and looked at me. She then picked up a mouthful of food and dropped it on the ground, and looked at me again, balefully. I smiled and cheerfully responded “that’s fine, whatever you need to do is ok with me, enjoy your meal.” She looked a little surprised, and went back to eating, finishing the whole thing, including the food on the floor.

From then on I’ve honored her new eating style, and problems have diminished. I know she’d rather have the cheese her pills are stuffed in than just about any dinner I make, but we’re clear that those are for after the meal (a little Premack Principle being used there). I’ve also tried to include a little turkey bone broth with meat on her meals (not able to yet in New Hampshire) because she does love that a lot. 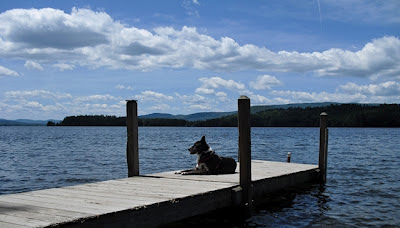 I’ve learned to accept her behavior changes as something she’s chosen to do differently. Here in New Hampshire she doesn’t always want to swim. She doesn’t want to get on my bed very much either (never a big part of our life, but there used to be a morning greeting). She’s always been her own person, but is really growing into that even more as she ages. She like to make her own decisions and I appreciate that, so do I. I can’t always accommodate her wishes on that account, but I do when it’s reasonable. I don’t need to prove my dominion over her when it doesn’t matter.

And if I pulled out a clicker and some treats she’d be more than happy to learn a new trick.

Excellent reminder Margaret! I shared this on my Facebook page - it is good and important information to have about old dogs.
Marcia
https://www.facebook.com/Natural.Dog.Wellness

Get posts by email